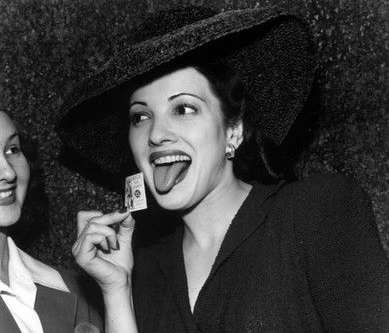 Lick it, then stick it.

Stamps aren't just a good way to pay for postage, they're an advertising tool that can make or break public opinion.

Everyone loves those colorful little works of art we use to pay for postage, but it wasn't always so. Here's the tumultuous history of the stamp.

What do Pokémon, Comic Books, and Postage Stamps all have in common?

There are just some people who've gotta collect 'em all. These are among some of the world's most popular collectibles.

But stamps aren't only big business for the Postal Service. Collectors can rake in some serious dough too.

And, of course, there's the practical value of a stamp too. These little squares ensure our mail gets to wherever it's going. They're so reliable, they've helped the Post Office achieve its status as one of the most trusted government institutions in the U.S.

But stamps weren't always so popular

It used to be that the recipient of a letter would pay cash on delivery. The cost of the service was so expensive though, that most people would refuse it and turn the post officer away.

There were also tricks to get around the delivery charge and still get your message.

Pen pals would develop secret codes and write them on the outside of an envelope. When the post officer would hand the recipient the envelope, they'd take a look at these codes, quickly decipher the message, then hand it back.

No need to open the letter when you already know what it says.

In 1837 British Postmaster General named Rowland Hill to take care of these pesky cheats. He came up with the idea to have the sender pre-pay postage in the form of a stamp. Ten years later and the United States Post Office Department adopted the same practice.

So many people refused to use pre-paid stamps, that Congress passed a law in 1855 requiring them on all letters.

The birth of stamps as an advertising powerhouse

The earliest stamps featured political figures, events from history, and generic designs that featured the cost of postage. No wonder they were unpopular!

But in 1948, the Post Office Department issued a stamp promoting the American Poultry Industry. It wasn't well-received, but it did open up the world of stamp design.

Two years after the Post Office Department dissolved in 1971 and the Postal Service took its place, the first self-adhesive stamp was issued. Throughout the 70s, stamps became more colorful and began to feature people and scenes from pop culture.

Though people collected stamps before, these familiar and fun designs popularized the idea of stamp collecting in the general public. In 1993, the Postal Serviced issued what would become the most popular stamp in history: Elvis.

By this point, stamps were beyond practical. They were sought after for their artistic value alone. They were a product in themselves.

Something that was once a source of contention with the American public, something people refused to pay for, had now become a large source of revenue and a pastime beloved by everyone.

And they were an advertising tool for the Postal Service itself.

These little rectangles no doubt shaped the public's opinion and helped USPS achieve that status as America's favorite government institution. How could an organization that provides so much joy through fun and relevant collectibles be hated?

Stamps are still used today to advertise the USPS

With so much political turmoil boiling up around the fate of the Postal Service lately, people are turning to stamps once again.

For the past fifty years, stamps have been the sole promoter of the organization's cause.

And that just goes to show the power of collectibles.

They give consumers something fun and engaging while keeping your organization top of mind. They can hold practical, sentimental, and aesthetic value all at once. And they can be a great motivator in times of distress.