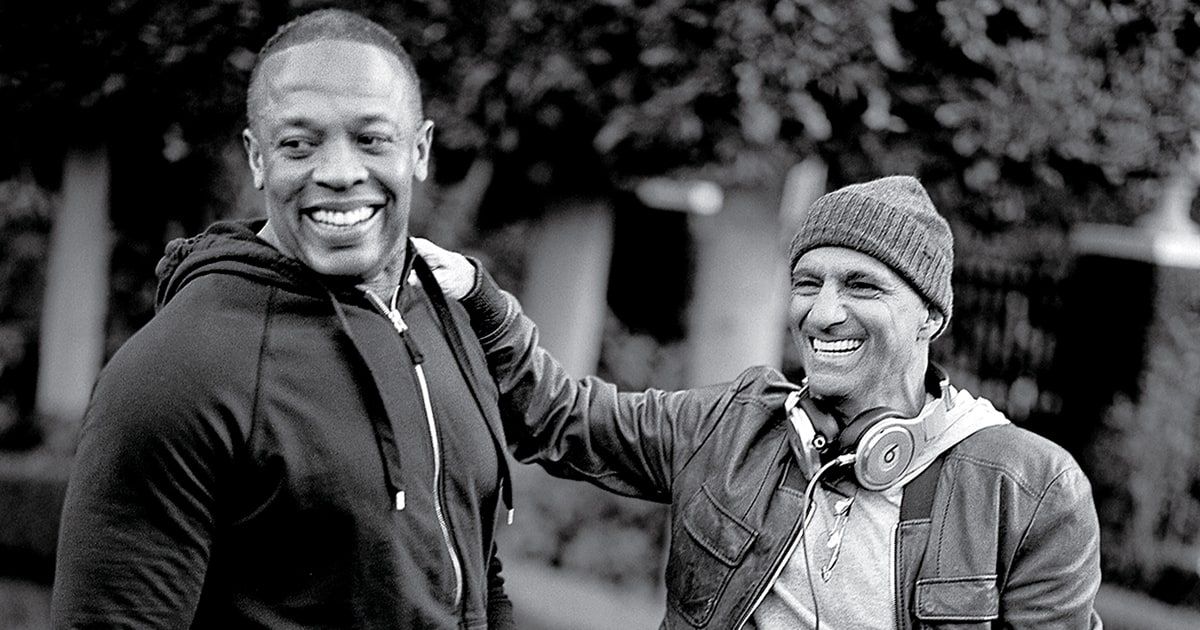 How Dr. Dre and Jimmy Iovine leveraged their previous successes to launch an innovative product worth billions.

In 2014 Apple aquired Beats by Dre for a whopping $3.2 billion dollars.

This was no accident.

HBO's four-part documentary series, The Defiant Ones tells the story of how rapper Dr. Dre and music producer Jimmy Iovine methodically built an empire from a previously untapped market. Take a look at the trailer:

The question is, what can we learn from this incredible story and how can we apply these lessons to our own marketing?

When everyone else zigs, zag

Every rapper sells clothes when they're ready to expand their empire. Jay-Z had Rocawear, P Diddy had Sean John, Kanye's got Yeezy. It's kind of a bad trope at this point.

When Dr. Dre was trying to figure out where to invest his hard-earned cash, his uninspired lawyer suggested launching a line of kicks.

Luck had it that Dre was hanging out with Iovine around this time. Iovine said let's do something different — let's sell speakers instead of sneakers.

The most popular headphones at the time were the cheap Apple earbuds that came pre-packaged with the iPhone. Iovine knew there was a breakout market here.

A little business finesse and product development, and Beats by Dre were born.

The levitator and the innovator

When Eminem says that Jimmy Iovine was the levitator and Dr. Dre was the innovator in the series' trailer, this is exactly what he means.

Dre knew what a good headphone should sound like — his passion is music. Iovine knew how to bring a headphone to the marketplace and make it succeed.

This kind of dynamic duo brings the best of both worlds to the table. A quality product with marketing that maximizes reach.

It's all about who you know (and who knows you)

Beats by Dre was anything but a get rich quick scheme.

Sure, the product and company was methodically planned, but the beauty of the plan was that it leveraged markets that Dre and Iovine intimately knew.

Iovine had worked as a producer with music industry legends such as John Lennon and Fleetwood Mac. He knew the business side of the industry like the back of his hand.

And Dre had a huge audience. Through sales from his own albums as well as numorous collaborations with other artists, Dre gained worldwide fame in the late 90s and early 2000s.

They used the audiences and connections they'd built through decades of hard work to launch a product to an audience that was already familiar with them.

This is one of the hardest things to communicate when I take on clients. Many come to me with a GREAT idea or product, but no connections, no audience, and no experience. I explain to them that overnight successes are far and few between.

But that's the thing. Beats by Dre was seemingly an overnight success that became one of the largest Apple acquisitions in history.

And yet it wasn't an overnight success because of the decades of work that Dre and Iovine had put in previously. They simply figured out a way to leverage their previous successes to launch something new.

What's it all mean?

Here's the takeaway. Overnight successes are usually anything but overnight, great products need a market desperate for them, and solid marketing means leveraging pre-existing connections and audiences.

A good idea isn't always enough. But with some hard work and creative thinking, the right product at the right time just might be worth billions.